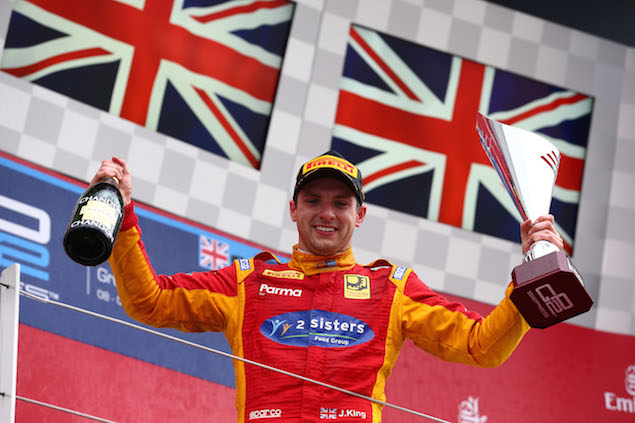 “I wasn’t into motorsport by birth, I played rugby, football, cricket as every young sportsman does and that is what I wanted to do. I always wanted to be a sportsman of some kind and then when I was 10 or 11 I went karting for the first time at an indoor place down the road, really enjoyed it, then took it a bit further. Then when I was 15 I broke my collarbone playing football of all things, and at this point I was juggling both - I’d turn up with muddy knees and jump into a go-kart on a Sunday morning sort of thing after playing a rugby match - and I was more disappointed I couldn’t go racing than play my other sports. So then that decided which one it was and I jumped headfirst into the deep end and gave it my best shot.”

What’s been the toughest challenge getting to the point you have so far?

“Well I started quite late relative to most people. I think Ollie Rowland was six or something when he first sat in a kart; really, really young. I only really started racing properly when I was 12 and I only gave it my full attention by the time I was 14 or 15 so I was quite late. For the first part of my career I was jumping through everything quite quickly to catch up and that was probably the hardest point. As for the generation of drivers that we’ve got I think they’re very good. I think we’ve got a really good batch of drivers at the moment so competition seems really high and you see when any of the young drivers go into Formula 1 they do a great job. So other than trying to catch up I think also the fact this generation of drivers are fantastic at the moment and I think there’s at least 20 people in this [GP2] paddock that could go into Formula 1.”

You’re a GP2 race winner now but what has been your best win of your career?

“You often say this but actually the best drive you’ve ever had is sometimes when you only finish fifth or sixth and you think ‘today that was the best I could ever have got and I didn’t even snatch a front wheel into Turn 4’ or whatever. Everything was perfect. But Silverstone [in GP2, 2016] was pretty special, that was a hard race to win as well and we did it with good pace. Obviously the first win in GP2 in Austria was quite special as well because it was the first one, but I’d probably say as wins go then the two GP2 wins are up there. But as for best win ever racing was my first ever win in karting. There were some really big names racing like Alex Albon, Jake Dennis - that shows how we have all got through together - and that was my first ever win and I think I’d been racing 11 months. That was my first win and I think the most special win I’ve ever had in racing.” 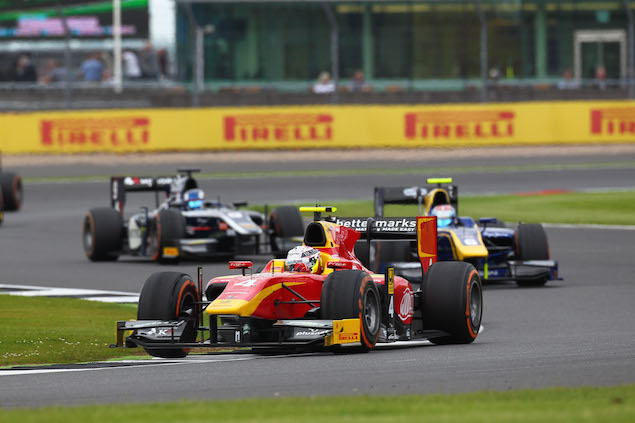 How crucial were the GP2 wins because of the stage it’s on and the people looking at you?

“I find it’s more for myself. It’s one of those ones that you think you’re good enough but you’re never quite sure. I’m not the type of person to be too arrogant and in your face. I’m self-confident but when you haven’t won a race it’s like ‘well, am I actually good enough?’ and then eventually you win it and it’s like ‘ah yes, I can do it, I need to stop beating myself off and I can go and do it again’. As for the stage, obviously it’s great but at the level we’re at it was nice to just tick that box and then you can focus on doing the best job we can and keeping going. Whereas when you’re finishing second all the time it’s like ‘come on, I want that win’. Now, finishing second doesn’t feel as bad because I’ve got that win now.”

Does it now mean you’re aiming for the title this year?

“It’s always been the goal. A few people have asked whether I’m more motivated or whatever. I wouldn't say I’m any more or any less or anything, the goal this year was always to go for the title. It’s still going to be difficult, we’ve thrown away a good chunk of points this year I think on a few aspects, so we’ve made it harder for ourselves. I think there’s still progress we can make in the car, still progress I can make myself, so it’s still the goal. We’re in a good position to do it, top three is more than manageable, so it’s really close. You keep plodding away at it, get some consistency and good results and we can still go for the championship.”

Is there an added pressure being affiliated with an F1 team as well? Are Manor watching you more closely?

“No, I put enough pressure on myself in everything I do. I still run athletics at a county level and I find I put more pressure on myself on the start line of that! It’s more because it’s the unknown, I don’t do it enough to actually know what I’m doing! Whereas with the racing I’ve done it so much and so long… What the TV sees is an hour on the racetrack on a Saturday afternoon but for that hour you’ve probably put in two weeks worth of work just for that one race. The amount of preparation that goes in you actually get to the race quite confident. It’s more then two weeks before where you’re like ‘are we doing it right and are we taking the right steps?’. 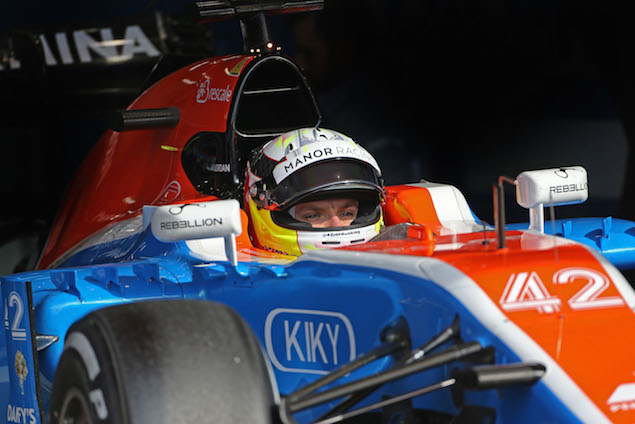 For yourself you have a fairly high-profile father, do you find that impacts on the pressure on you at all to prove you’re here on talent?

“No, I don’t feel I get pressure from my dad or anything. I like to think my results will speak for themselves in that sense but for me obviously I want to be successful whatever I partake in, whether that be motorsport through to business. I think it’s quite nice that actually I’ve found something different to my dad so I can’t compare myself to him. Even though we’re massively competitive, everything we’ve ever done we’ve tried to kick each other’s heads in since I was yea big. Anything from playing snooker as a three year old or badminton in the garden we’re always trying to compete with each other, even on past athletics times which he claims he did but he never did! I remember my dad making me cry all the time as a child because he would never let me win. I always remember my mum would always be like ‘oh let him win one’ but he would never let me win. Then obviously as I got older I started to actually beat him and then there was a crossover point where he started to back down from any competition!”

Another sort of competition internally here in GP2 is these are all the guys you’re fighting with for an F1 seat eventually. From a British perspective is there an internal competition between you all because you’re all fighting for coverage, attention and backers?

“I suppose there is. I don’t really think about it. I always think everyone is in their own boat and you can’t really compare too much. Obviously you can to a certain degree because you’re competing for the same trophy at the end of the year, so you are obviously comparing, but Ollie is backed by Racing Steps and has his own career path. I think he’s a couple of years older than me and that’s how he’s done it. Alex Lynn is a year older than me I think and he’s done it slightly differently again. Obviously you look at them a little bit and think I’m doing better here and worse there and stuff like that, but you’re focusing on your own thing. I know where I want to get to and I know roughly how to get to it so I’m just concentrating on doing that really, to be honest.” 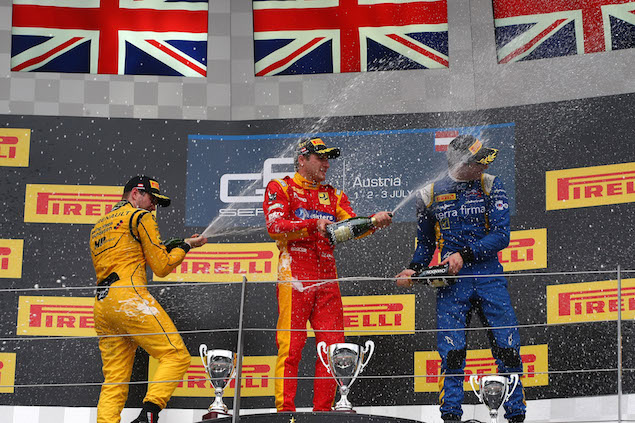 Is the goal to be racing in F1 next year?

“Yeah, yeah. The childhood goal was to be Formula 1 World Champion, so to get into a race seat at some point has got to be on the path to achieve that and I feel the time is right to be moving up next year, that’s the goal.”

Your paddocks are separate but do you have any inspirations or anyone you look up to from the F1 grid?

“I wouldn’t say I have any heroes. People always ask if I have heroes but I don’t really because I always want to be the best that I can be, and the best that I want to be is the best ever so you don’t really want someone to look up to because you’ve already set yourself a limit. I admire what some of them have achieved. Lewis [Hamilton] is going for his fourth world title now, [Sebastian] Vettel has got four, if I could achieve that it would be amazing. There’s Schumacher with seven, but even Jenson Button with one and 17 years in F1 so that’s not a bad career is it! I have what I aspire to be and I admire what people have achieved but that’s the same in any walk of life really - other sports or business - I admire what people have achieved but I wouldn't say I look up to them.”