Ahead of the second round of the 2015 season in Malaysia, F1i recaps the first race held at Sepang. 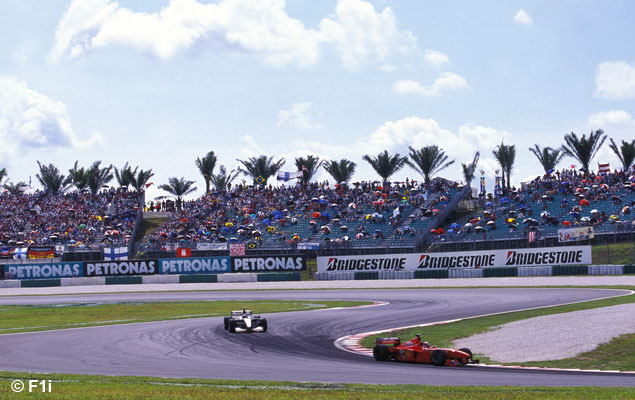 The Sepang circuit hosted the inaugural world championship Malaysian Grand Prix sixteen years ago, in 1999. While the race itself was a fairly unremarkable affair, the context surrounding the event was anything but and delivered a few defining moments and a surprising result.

Designed by F1's resident architect, Hermann Tilke, the state-of-the-art Sepang International Circuit was the first Asian venue to be visited by the F1 community outside of Japan.

The backdrop to the penultimate race of the 1999 season offered an intriguing landscape. McLaren driver Mika Häkkinen led Ferrari's Eddie Irvine in the championship by a mere two points, while the event also marked the return to racing of Michael Schumacher, who had been out of contention for several months since breaking his leg in a crash on the very first lap of the British Grand Prix at Silverstone.

It was the German's fourth season with Ferrari, which had not yet established itself as the dominant force it would soon become and had yet to clinch a drivers’ title last won by Jody Scheckter in 1979.

With Schumacher sidelined all hopes were pinned on Irvine to get the job done, but the Irishman was no real match for Häkkinen in the second part of the season, although a series of errors by the flying Finn kept the championship open until the final two races of the year. 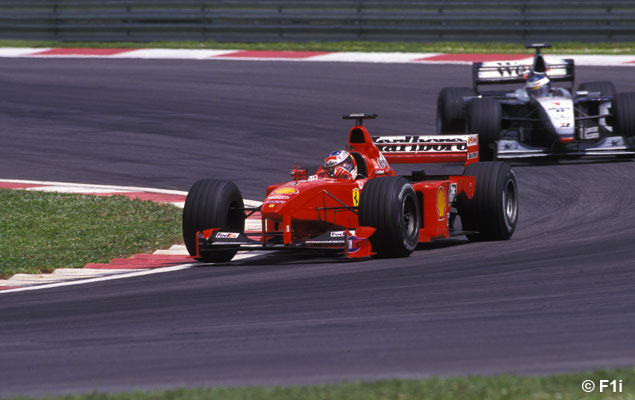 Such was Schumacher's motivation to break the Scuderia's 20-year championship drought, it was said that he was reluctant to return to racing that season because it would mean helping a team-mate he viewed as a mere journeyman reap all the benefits of his own hard work, and win the title.

While paddock pundits no longer expected the German ace to return, a few days before the Malaysian Grand Prix it was announced he would race. Rumour had it that Ferrari boss Luca di Montezemolo had called the Schumacher residence the prior weekend, and spoke to young Gina-Marie, who told Montezemolo that her daddy was "outside playing football!" Needless to say, Schumacher was ordered in no uncertain terms by his boss to board the first plane to Kuala Lumpur.

Ferrari's number one driver may have been unwilling to support Irvine's title bid but once he was back on duty, Schumacher did exactly what was expected, putting his car on pole, then letting his team-mate through before dubiously blocking Häkkinen for the rest of the race, much to the Finn's complete dismay. Irvine won the race and took the lead in the championship. At least for a few hours, as both Ferraris were disqualified for illegal bodywork, a state of affairs which - in theory - handed the world title to Häkkinen.

But ultimately, after Ferrari appealed the decision and provided a clever rebuttal to the FIA Court of Appeal judges in Paris, Irvine and Schumacher were reinstated. The reprieve was brief for Irvine however as Häkkinen ran away from both Ferraris at the last race championship showdown at Suzuka, deservedly securing his second consecutive world title. 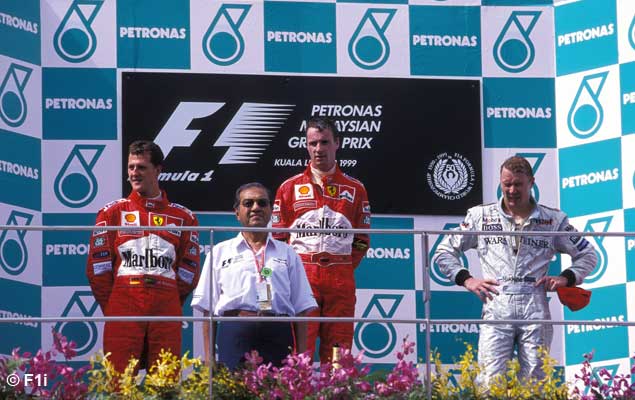