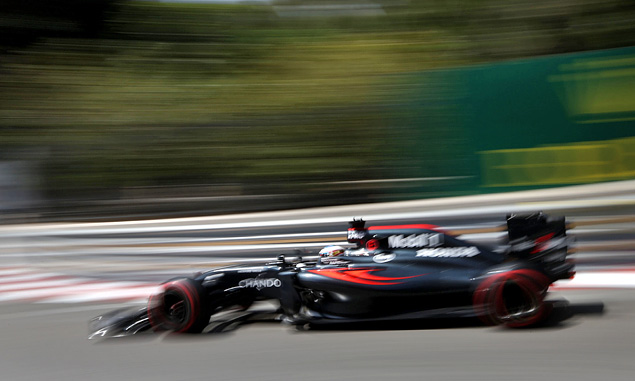 Fernando Alonso
“We had a little bit of stress with the red-flag stoppage in Q1: we only had six minutes left and I hadn’t set a time. Our main goal today was to get into Q3, but I still don’t really feel confident with the car – I didn’t have a perfect feeling with it, and I wasn’t therefore confident enough to really attack the corners.

“Our predictions ahead of this weekend were maybe a little over-optimistic, but let’s see what happens tomorrow. We’ll need some rain, snow or whatever to give the race a little bit of action – the start will dictate the complexion of the race, but hopefully the weather will make the show more exciting.

“It would be great to come out of the weekend with some decent points.”

Jenson Button
“My lap in Q1 felt okay, then the balance went away from me as the circuit gripped up. On my final run in Q2 I had front-locking into Turn Three, locked the front-left and overheated the tyre, which meant I lost front-end grip after that.

“Still, this is Monaco, and anything can happen. The first corner is usually eventful; then, after that, it’s about sitting behind the guy in front. You can try and dive down the inside of another car into Turn 10 [the Harbour Chicane], but that’s a no-go for us because we’re too far back by the time we get to that part of the track.

Eric Boullier, racing director
“Clearly, we’re disappointed with our overall qualifying performance here at Monaco, since on such a tortuous circuit we’d expected our car to perform a bit better relative to some of our rivals’.

“Even so, despite the fact that neither of our drivers has ever felt truly happy with the balance of our car here, they both tried as hard as ever, carving neat, solid laps in so doing.

“It was a pity that we managed to get only one car into Q3, but that wasn’t for lack of trying.

“Tomorrow, wet weather is forecast, and the combination of rain and Monaco is a notoriously unpredictable one; so anything could happen.

“Points for both our drivers will be our target.”

Yusuke Hasegawa, Honda R&D head of F1 project
“We are encouraged by Fernando’s Q3 performance today, as we all know that Monaco is a notoriously difficult track at which to overtake, and starting grid position is very important here.

"Throughout the weekend, both cars had difficulties to bring out the maximum potential of the ultrasofts, but the drivers were able to bring out the best of them during the qualifying sessions today.

"From the power unit perspective, we have been hard at work setting and fine-tuning the Monaco track-specific data that we tested in Barcelona, and the driveability looks to be good. As for tomorrow’s race, everything is unexpected here, including the weather and any incidents on track, so we are looking to our two experienced drivers to manage the race well and hopefully bring home some points for the team.”