Daniel Ricciardo took his first victory of 2016 as Lewis Hamilton's championship hopes took a major blow as he retired from the lead of the Malaysian Grand Prix.

Hamilton looked set to take the championship lead after team-mate Nico Rosberg was hit by Sebastian Vettel at the first corner, spinning the Mercedes and taking the Ferrari out of the race. With the two Red Bulls scrapping over second place with 16 laps to go, Hamilton's race was dramatically ended with a power unit failure at Turn 1.

The defending champion shouted "No! No!" over team radio and rolled to a stop with his head in his hands on the outside of the first corner. The fight between the two Red Bulls then became the lead battle - with Ricciardo ahead of team-mate Max Verstappen - and the pair lapped within two seconds of each other for the remainder of the race but appeared to have been told to hold station.

Rosberg extended his championship lead to 23 points as a result of Hamilton's retirement as he recovered to third place. It was a good performance from the German, who made a number of moves - including a robust pass on Kimi Raikkonen at Turn 2 which earned him a 10-second time penalty - as he fought back from the first lap incident.

While Rosberg was unfortunate to be hit by Vettel, his luck was in when Hamilton stopped. He was soon handed the time penalty which required him to extend a six-second advantage over Raikkonen to more than ten, which he duly did. The result also cost Mercedes the chance to secure the constructors' title, which will have to wait until Japan at the earliest.

Raikkonen came home fourth ahead of Valtteri Bottas in the Williams who impressively carried out a one-stop strategy. Sergio Perez was sixth ahead of Fernando Alonso - who rose from last on the grid to seventh place - with Nico Hulkenberg, Jenson Button and Jolyon Palmer rounding out the top ten. Palmer's result was his first point in his F1 career, as he too made a one-stop work.

The race looked set to be a pivotal one in the drivers' championship from the first corner when Rosberg was demoted to the back of the field. In much the same way Hamilton was hit by Bottas in Bahrain, Rosberg turned in to find Vettel outbraking himself on the inside as he tried to pass Verstappen. The contact was heavy as Vettel broke his front left suspension against Rosberg's right rear, spinning the Mercedes and leaving him only ahead of Felipe Massa who had started from the pit lane after failing to start the formation lap.

After a Virtual Safety Car (VSC) period to clear the Ferrari, Hamilton was kept honest by Ricciardo for a spell in the opening laps. Verstappen had been caught up in the contact and dropped to fifth place but quickly despatched both Raikkonen and Perez within five corners to move back to third on the road.

Rosberg got the better of both Esteban Ocon and Marcus Ericsson on lap six to move back to 12th and was showing strong pace before the race was neutralised again two laps later when Romain Grosjean's brakes failed at the final corner and he ended up in the gravel. The incident came a lap after Alonso has passed the Haas for ninth place, with the Spaniard making an excellent start from the back of the grid after a 45-place grid penalty.

A number of drivers opted to pit under the second VSC, including Rosberg and Verstappen from third place as the latter emerged as a threat for victory. Fitting soft tyres, Verstappen had a 7.6s lead by the time all of the leading cars had made their first stops at the end of lap 22.

Hamilton and Ricciardo took on hard tyres and both started cutting Verstappen's lead before the Dutch driver stopped for hards himself on lap 27, clearly attempting to run to the end of the race. With Verstappen within a pit stop of Hamilton, the Briton needed to go to the end himself - a stint of 36 laps.

Rosberg had risen to fifth place but was stuck behind Raikkonen and threw his car up the inside at Turn 2. There was contact between the two as a result, with Rosberg running into the side of the Ferrari but both continued. 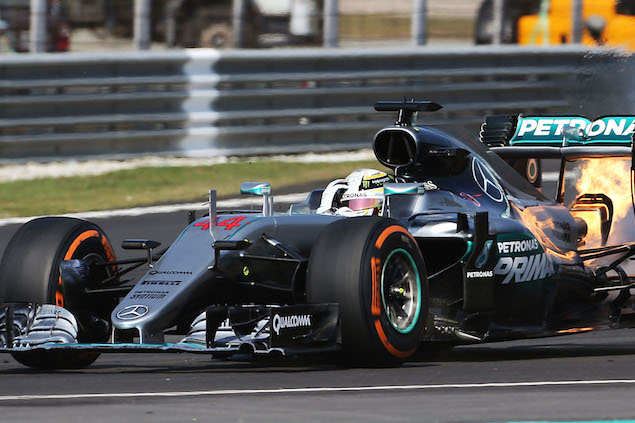 While his team-mate fought back, Hamilton's race appeared to be becoming easier as Red Bull let its drivers fight over second place, with a brilliant scrap between the two seeing Ricciardo hold on ahead of Verstappen. It proved crucial as at the start of lap 41 Hamilton's engine let go, with the triple world champion coming to a halt on the outside of the first corner.

The image of Hamilton on his knees on the outside of the track could come to be an iconic one this season as 25 points slipped away. With the VSC deployed again all of the top four pit for soft tyres, allowing Red Bull to call off the fight between its two drivers and Rosberg to pull away from Raikkonen having been penalised for his move.

Behind them, Bottas had made a one-stop race work to gain track position and move up to fifth place, keeping Perez at bay as Williams and Force India continue to fight over fourth in the constructors' championship. Bottas picked up 10 points for fifth with Perez gaining eight and Hulkenberg four, leaving Force India to extend its advantage to five points.

The result is Red Bull's first one-two since the Brazilian Grand Prix at the end of 2013, and tightens the team's grip on second in the constructors' championship. It's this race's impact on the drivers' title, though, which is likely to have the biggest ramifications heading to Suzuka in a week's time. 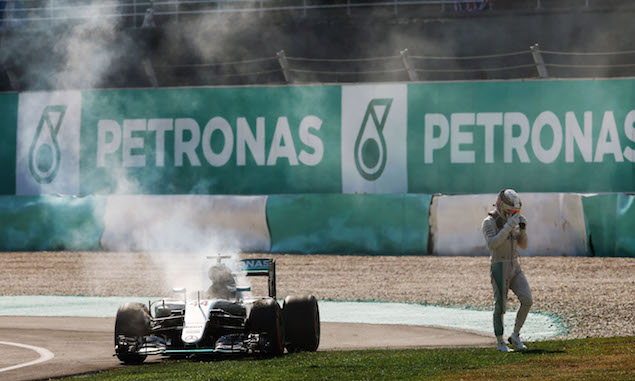 AS IT HAPPENED: Malaysian Grand Prix