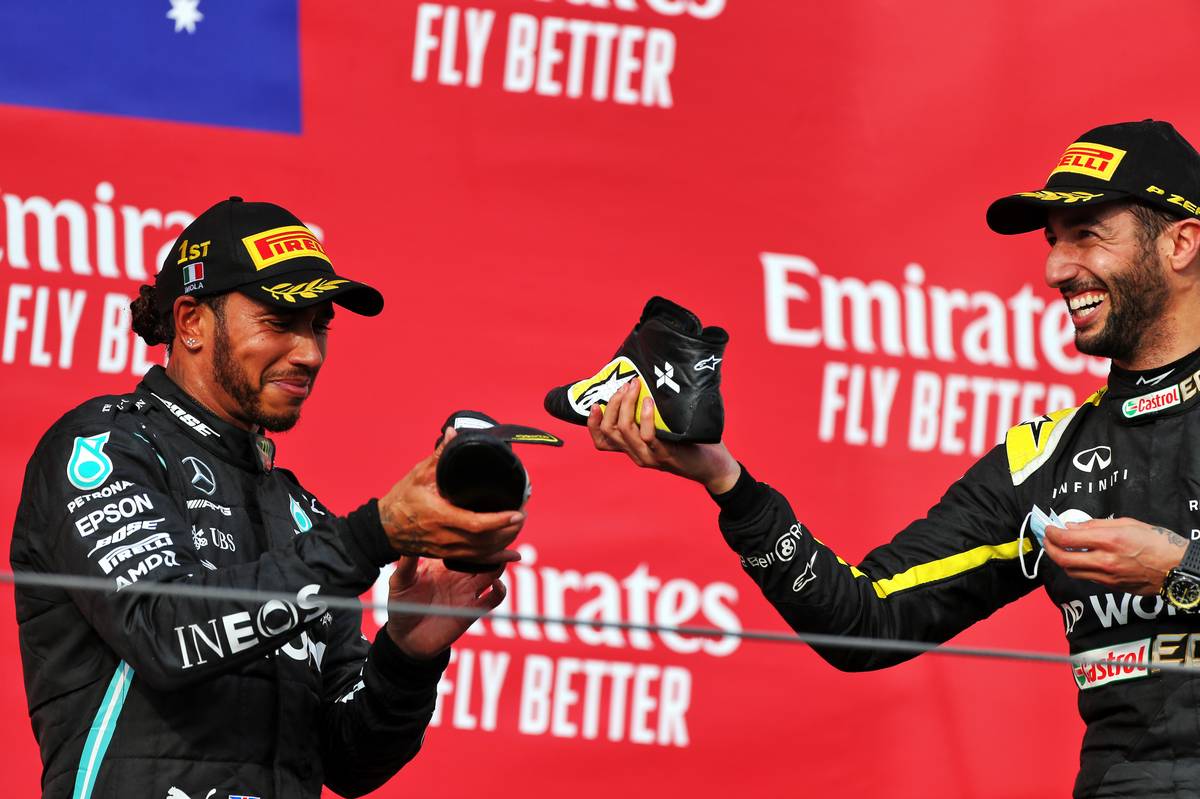 Valtteri Bottas
"A massive congratulations to the team on winning the Constructors' Championship! I'm really proud to be a part of this team and thankful for everyone's hard work and dedication. It's well deserved and I'm really happy for everyone at the track, Brackley, Brixworth and Stuttgart. This team keeps pushing and raising the bar and it's inspiring to work with such a dedicated and driven group. Obviously, it was a tough race for me today. The start was really good but then on lap two, out of Turn 7, there was some debris on the track. I didn't have time to avoid it, so I aimed for the middle of the car, trying not to run over the debris with the tyres. But it caused some damage and got stuck on the car somehow, which made the car really tricky to drive and also cost a chunk of performance. I was trying as hard as I could to keep Max behind me and had to push over my limits, which led to some mistakes. It was a bit of an unlucky day for me after such a promising start, but it's still good to pick up another podium and play my part in the Constructors' title win."

Lewis Hamilton
"It's very overwhelming right now. I look at this team and think of everyone back at Brackley and Brixworth, they are the unsung heroes. They are the ones grafting away, never giving up, continuing to push, elevate and innovate. A big congratulations to the team on a hugely deserved Constructors' title. I'm forever grateful to everyone and so, so proud to be a part of it. To come back year on year and deliver such great performance is absolutely unbelievable. 7-time champions - that's something I'm going to be able to tell my grandchildren one day. No team has ever achieved this and I feel honoured to be a part of breaking this record. A big, big thank you to the entire Mercedes family, to PETRONAS and all of our partners, because we wouldn't be able to do what we do without them. The race itself was an exhausting one, particularly with the speeds that we are experiencing around this track. I had a tricky start but extended the stint and managed to fight back to the front. It feels fantastic to clinch the title today at Imola in style with a 1-2."

Toto Wolff, head of Mercedes-Benz motorsport
"This is an unbelievable moment, this afternoon feels like a culmination of everything. This has been an unusual season in so many ways and it makes me very proud that we've been able to achieve this. Lots of blood, sweat and tears went into this behind closed doors, a lot of people have made great sacrifices to achieve this, so a massive thank you to everyone in the team, here at the track and back at home in Brixwoth and Brackely. We have an amazing group of people that keeps pushing and raising the benchmark to new levels, but what stands out the most is the comradery in this team and the right values at the core of it. A big thanks as well to everyone at Mercedes for the continuous support and their trust in this team - when I think of the support we have in Germany, it just puts a smile on my face. Thank you as well to everyone at PETRONAS - we could not have done this without you! PETRONAS played a big role in this achievement; they've been with us since Day 1 and we're very proud to represent them on the track. I don't know where this team will go next, but I'm excited to see what the future holds for this inspiring group of people, that is still motivated and energised and wants to set the bar even higher."

Andrew Shovlin, chief race engineer
"Well done to the whole team, everyone in Brackley and Brixworth on the 7th double, it's just amazing and so nice to do it with a 1-2 finish although it's not sunk it yet. The race wasn't easy, Valtteri picked up someone's barge board on lap two which got jammed in our bargeboard area and was pretty disastrous for the aerodynamic performance. His pace was impressive considering and he was managing the stint well but he couldn't pull away from Max by more than just enough to just protect the undercut. When Max stopped we had to cover with Valtteri and had a go at pulling the part out but we couldn't afford to slow the stop down and had to send the car with it still jammed in there. Lewis stayed out and was doing a good job on the older tyres, working his way through backmarkers and trying to get the pit window to Max and Valtteri. We then had the VSC which worked in Lewis's favour and he was able to stop comfortably into the lead. Valtteri had his work cut out trying to defend against Max but on the Hard tyre it was tricky and eventually he lost the position. Later in the stint, we were monitoring a bit of vibration on Lewis's tyres when Max had his puncture 12 laps from the end; given that we had free stops we were going to come in on a safety car. The timing was not great for Lewis, he'd just passed the pit entry when it was called so he was stuck behind it for the lap. With Valtteri we got him in and finally managed to remove the competitor's part that had been holding him back all race. We made the call to stop Lewis anyway, even though it risked the win we were concerned the vibrations would grow and amazingly he just managed to hold onto the lead. From there it was just a case of counting the laps to the finish but it was great to get both over the line and secure both championships for Mercedes with a first and second."

Markus Schäfer, non-executive chairman at Mercedes-AMG Petronas F1 team
"Huge congratulations to the entire Mercedes-AMG Petronas F1 Team! Setting a new world record with seven consecutive Constructors' Championships is an amazing achievement - one that goes far beyond our boldest dreams when we embarked on this journey ten years ago. Thank you to every single member of the team in Brixworth and Brackley for your passion, your determination and your continuous hard work. Our Mercedes-AMG works team has truly earned its place in the history books of Formula One this year. They've built a car that is already considered to be one of the best F1 cars ever created, highlighting how we're constantly trying to push the boundaries of innovation at Mercedes - on the track and on the road. A special thanks to the team at Mercedes-AMG High Performance Powertrains who have developed the best hybrid engine in motorsport, powering us to this historic success. But it's not only the technical and sporting achievements that are remarkable. Our F1 team has risen to many challenges this year, showcasing the values that are at the core of this inspiring group. When the F1 season was interrupted at the start of the year, they produced 10,000 breathing aids to help in the fight against COVID-19. And when the F1 season continued, our team returned to the track with renewed purpose, taking a clear stance against racism and discrimination and challenging itself and the sport to become more diverse and inclusive. Our F1 team is also pioneering sustainability in the sport and will achieve a net-zero carbon footprint this year. This has been a challenging season in every aspect, but we have seen what champions are truly made of. In the name of the entire Mercedes family: Great job - we're very proud to have you in our team!"