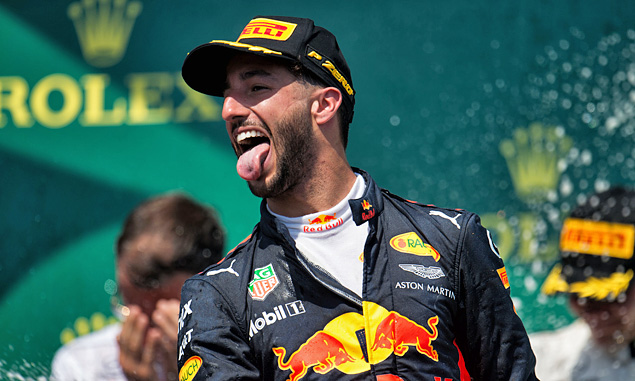 Daniel Ricciardo
"It was tough out there today. When we put the softs on I thought it's a good thing to do to get to the end. (Sergio) Perez was on me for a bit and then there were a few laps when I was able to pull away. It looked like he was struggling but maybe he was just having a breather and then he had a second attack. I couldn't afford any mistakes, especially in the last sector, because if they get the DRS and get a run it's hard to keep them behind. I had to be close to perfect in terms of not making any errors but it wasn't easy as the grip was low and the wind was crazy out there. Not the easiest third place but when I saw the chequered flag I was like: yes I can finally breathe. I had zero intention of doing a shoey again, but the crowd was chanting and then Sir Patrick (Stewart) got involved so I thought: alright, we might be on here. I think it turned out pretty good."

Max Verstappen
"The way the race ended for me was very frustrating after such a good start. I think a podium was possible but once again we come away with nothing. The start was really good, straight away I felt no wheel spin and could just put the power down and make some places. I had a little bit of contact with Seb (Vettel) on the first corner, running wide there means it can sometimes happen. From there on the pace felt good and I was looking after the tyres and brakes as we had no chance of catching Lewis. I was just concentrating on doing my own race when I suddenly lost all power and everything shut down. I have had a lot of disappointments recently, I guess that's racing but sometimes you get tired of it."

Christian Horner, team principal
"An excellent podium for Daniel today, who really didn't make any mistakes, despite huge pressures from Force Indias and Ferrari behind. We banked track position early on with the soft tyre with the intention of going to the end of the race and that worked out well today. It was a great shame for us to lose Max after 11 laps. He had an unbelievable start which propelled him into second place by turn two, and then after an audacious move to take the lead at the restart he was looking competitive for second place when a suspected energy store failure caused an instantaneous retirement. Very tough on Max but I'm sure his time will come soon. Leaving Montreal and one of our more challenging tracks on the calendar with a podium is a positive result and good to see Sir Patrick Stewart having fun on the podium."