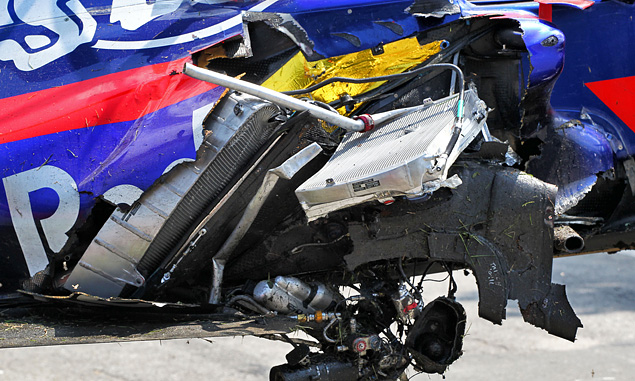 Carlos Sainz
"What a tough start to the race – I had a good start and was in P12, trying to overtake Fernando around the outside of Turn 2... He got better traction than me out of there so I focused on positioning myself to try and attack him into Turn 3 and, all of a sudden, I touched with a Haas that was on my right-hand side... I have to say I never saw the car there, it's simply a dead angle in my mirrors so I never knew he was there. If I had realized I was there, of course I would've been more careful and left some space. Once we collided I was just a passenger, crashed into the wall and that was the end of my race unfortunately. I'd like to say sorry, especially to Felipe, who received a touch from me... I just couldn't do anything to avoid it. It was a big crash, but I'm fine. Unfortunately, the whole weekend has been a bit difficult for us, starting with not being able to run in FP1, then yesterday's qualifying and today's accident... It's now time to focus on Baku; luckily we have 20 Formula 1 races so we can forget this weekend!"

Daniil Kvyat
""A very disappointing day. Our problems already started during the formation lap - my engine stalled, so I had to catch all the cars before the Safety Car line, which I didn't manage to do so I got a penalty for it... But we were still going for P9 as the pace was mega good today! Unfortunately, during my pit-stop we had a problem and then we retired... It was too late to do anything after losing so much time in the pits anyway. I did everything I could do today but what's annoying is that every time we have very good pace something happens or goes wrong... It's very frustrating, we deserved a reward today."

Franz Tost, team principal
"Our Canadian GP race weekend has been a difficult one –it all already started in yesterday's qualifying session, where we didn't manage to get the cars into Q3. We started the race from P11 with Daniil and P13 with Carlos. Unfortunately, Daniil's engine stalled at the start of the formation lap – we need to investigate how this happened, because there's no excuse; an engine should never stall and there must be a technical solution to avoid this from happening. The regulation allows the driver to catch-up until the first Safety Car line but as all the drivers use the complete width of the track to warm-up their tyres, it was difficult for Daniil to overtake them in order to get back to his position without taking any risks. Therefore, he just missed overtaking Alonso before the Safety Car line – it was also too late for him to go into the pit-lane – so he got penalised for this. Daniil did a very good race and was very competitive, putting in some really good lap times. We then had to call him in for his pit-stop and for him to serve a ten-second penalty that was in addition to the drive through he had already been given, but we suffered a problem with the rear-right wheel-nut. Therefore, we decided to retire the car because, at this stage, we were two laps behind. Regarding Carlos, he had a reasonable start but then collided with Grosjean at Turn 3 and this was the end of his race. Unfortunately we leave Canada without scoring any points and with a bag full of work to do for next race in Baku."