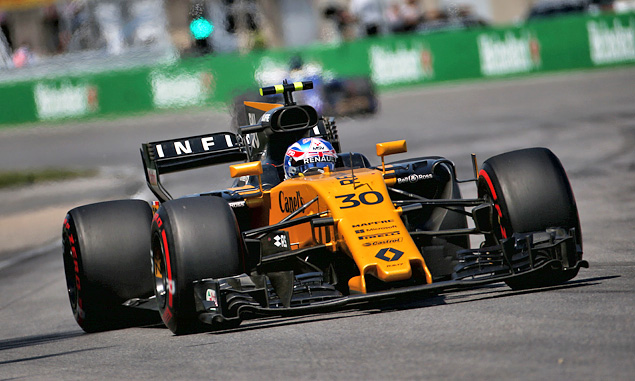 Nico Hulkenberg
"Today's race was quite positive for us overall; everything was running pretty smoothly although the wind was crazy at times; blowing the car from left to right on the straight! Obviously we were helped by some DNFs but nevertheless I found myself in eighth place and four nice points isn't bad given this was a track where we were a bit worried on how good we were going to be."

Jolyon Palmer
"We finished in P11 again today, two races in a row within touching distance of points. This is very frustrating, I lost a lot at the start with the mayhem, I lost positions then got stuck behind Grosjean for about 60 laps and couldn't get close enough to attack him. I think the pace was a bit better and if I could have started a couple of places higher, we could have gotten into the points. The race was much better again, Q2 this weekend was positive, we just need to keep working hard."

Cyril Abiteboul, managing director
"We had a good race today in Montreal, the results were positive and we're happy to be resuming our series of points finishes after a frustrating retirement in Monaco. Today's race allowed us to reduce the deficit between us and Williams, as we are aiming for sixth in the Constructors' Championship before the mid-season break. Nico had a good race, with a very strong pace, finishing on the lead lap. He was able to stay focused and remain unaffected by the mayhem and penalties around him. Jo had a similar strategy and he now has two P11 finishes in a row. The priority moving forward is for him to qualify higher in order to get a shot at winning some points and contribute to the team's effort to gain ground in the Constructors' Championship."