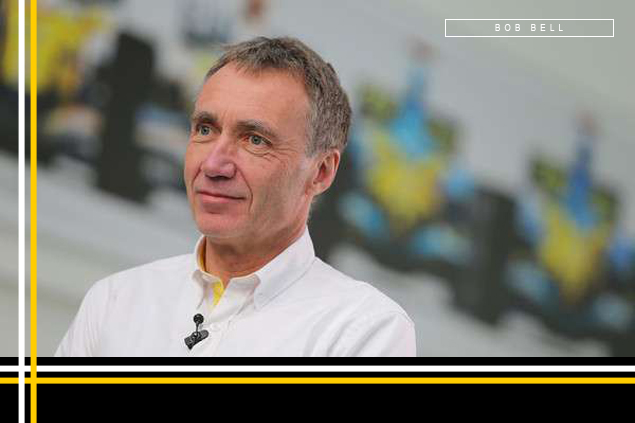 Bob Bell’s motorsport journey started in 1982 at McLaren, where he served as the team’s aerodynamicist at a time when that field of study was only taking its first tentative steps. Under design genius John Barnard’s stewardship, Bell successfully collaborated with Steve Nicholls and Neil Oatley Bell, working most notably on the iconic MP4-4. In 1988, he became head of Woking’s research and development department and started exploring new subjects such as computer-aided design and computer-aided manufacturing. Having overseen the aborted “MAVerick” land speed record programme, Bell joined Benetton in a senior aerodynamics role. A brief stint at Jordan followed before he moved to Enstone along with Mike Gascoyne. Bell initially served as deputy technical director before replacing Gascoyne in 2003.

The Bell-designed Renault R25 and R26 were extremely successful machines, leading to a quartet of world titles for the French manufacturer and star driver Fernando Alonso in 2005 and 2006. The next two campaigns were more challenging following the switch to Bridgestone tyres, though Alonso returned from McLaren to win a couple of races in ’08. In the aftermath of the Singapore Crashgate, Bell took over from Flavio Briatore and Pat Symonds and became managing director in 2010, with James Allison promoted to assume the responsibility previously held by Bell.

In 2011, Ross Brawn tasked the Northern Irishman with heading and rebuilding Mercedes’ technical department after the ex-Ferrari man had to lay off a huge part of its staff at the time of Brawn GP. Mindful of the challenge at hand, Bell hired top engineers Geoff Willis and Aldo Costa and methodically coordinated Brackley’s chassis division and Brixworth’s engine department.

His methodical approach would pay dividends over the 2014 and 2015 seasons, with Mercedes racking up 32 wins out of 38 grand prix weekends and four world championships. However, Bell handed in his resignation in December 2013 and effectively left the team at the end of the following season.

At the 2015 Canadian Grand Prix, F1 minnows Manor announced the 57-year-old as a technical consultant to the team. Bell was then approached by Cyril Abiteboul to ‘audit’ his former Enstone outfit, identify weaknesses and jobs that needed to be filled, all this with an eye towards assessing the soundness of Renault’s project of returning as a constructor.