Catch up with what all the teams had to say following the 16th race of the 2016 season - the Malaysian Grand Prix at Sepang International Circuit. 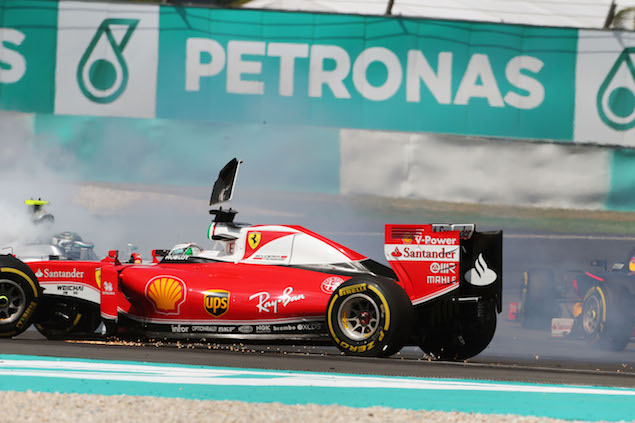 Sebastian Vettel
“We had a good start, then I was going side by side with Max. We were both battling for position into turn one. Nico in the front was turning in and he obviously decided to pick his line, which is absolutely fair and in his right. At that point with the speed I had I couldn’t slow down anymore and I was also pushed by Max to the right. I did my best under braking but I couldn’t avoid the impact. It was an unfortunate chain reaction which ruined my race and Nico’s one. I can’t do more than apologize to Nico, because the accident had nothing to do with him being in front. I think it was different to the case in Spa with Max and Kimi, as Max and I were trying to fight for turn 1, and Nico was trying to do a different thing ahead. I don’t have to comment on what Max said afterwards.”

Kimi Raikkonen
“Fourth position is not the result we wanted, but today unfortunately we couldn’t get more. Overall the car was not too bad and the handling was quite ok, but the pure lap time was not there. We were missing speed and we never had the chance to challenge the cars in front . When Rosberg passed me I suddenly had to turn right to avoid him: I knew he was going to hit me and we both would have probably been out: my rear floor was damaged because of that and Nico got penalized. After that I did my best to keep the ten seconds gap to him, but unfortunately it was not enough to get a better result. Obviously we want to be higher up, but now we have to take what we get. We’ll try to improve and push forward to make the car faster and be able to challenge the others.”

Maurizio Arrivabene, team principal
“Clearly, this was not the result we had wanted. In a very tactical race like the one we had today, having both cars on track would have been of fundamental importance. So, seeing what had happened to Seb, we planned a very aggressive strategy for Kimi, but then everybody else did the same. It’s a pity that some damage affected Kimi’s performance today: first, a piece of rubber got stuck in the rear wing profiles, causing the wing to stall and then there was the collision with Rosberg which caused further damage to the bodywork. As for Seb’s incident at the start, I talked to him and I’d rather not comment on the stewards’ decision.”