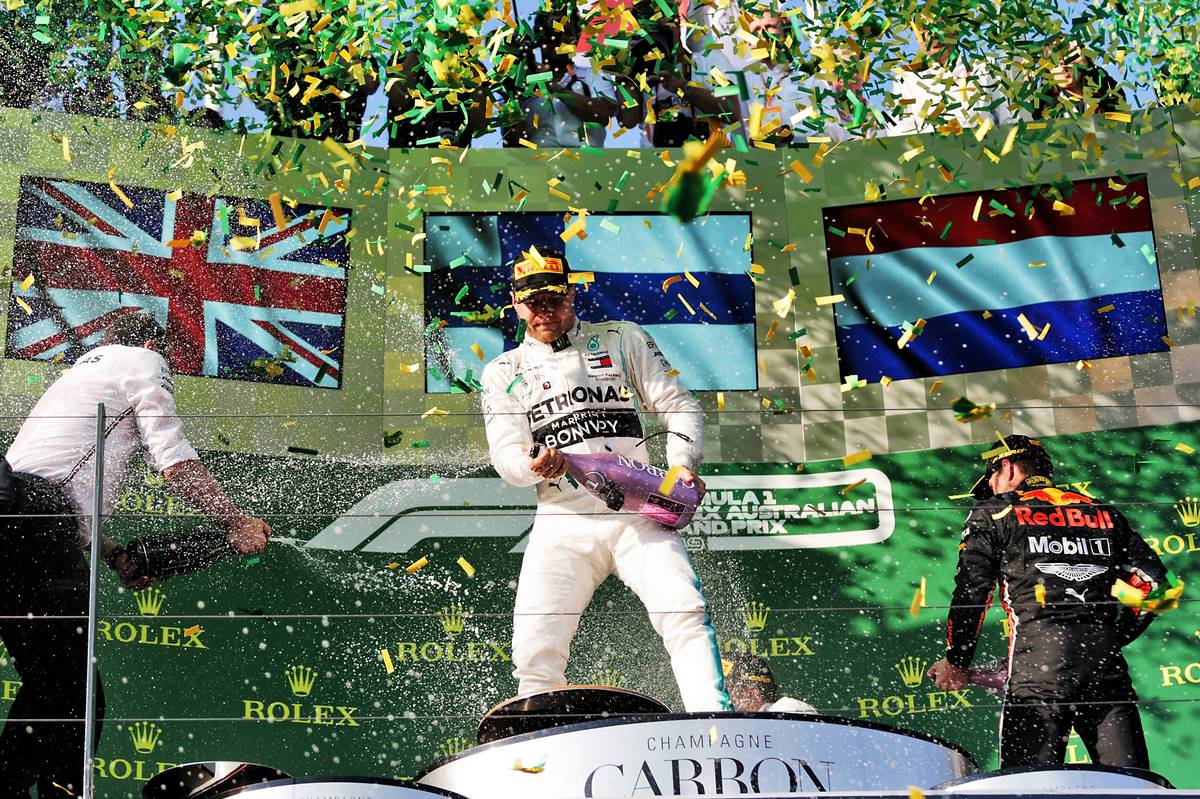 Valtteri Bottas
"This feels so good - I don't think I've ever had a race like this! We could not have asked for a better start to the season - getting maximum points for the team is a perfect result and we couldn't be happier. It's also an important result for me personally, I'm really pleased with how the race went. These things don't just happen - both the team and I have worked hard for this and it seems like the hard work paid off today. The key was the start; I think Lewis may have had a bit of wheel spin, so I was able to take the lead. My race pace was really strong, I could pull away and build a gap. In the end, I managed to get the fastest lap as well, which of course means an extra point this season, so I went for it. It can be a little risky with worn tyres, but I had it all under control. I'm very, very pleased with today, but it's only the first race and we have another 20 races to go."

Lewis Hamilton
"It was an incredible weekend for the team, we're leaving Melbourne with maximum points. Valtteri did an exceptional job today - congratulations to him. I had a pretty straightforward race today; I lost position at the start and my race was pretty much done and dusted after the first corner. Afterwards it was really about bringing the car home and bagging the points. I had to pit early to cover the pit stop from Ferrari, so I had a long second stint and drove super carefully to make sure I had tyres left at the end of the race. I'll bag the eighteen points I got today, keep working and come back recharged for the next one. It was a really great weekend for the team and I'm really happy for everyone. We showed a great performance today and we need to continue to build on this - we have a long season ahead of us."

Toto Wolff, head of Mercedes-Benz motorsport
"That was a great day and an awesome drive for Valtteri - a perfect rebound after how last season finished. Over the winter, he recharged the batteries, reset, found his joy of driving again with the rally in Finland - then today it all came together for him. I can see again the young boy I first met over ten years ago and who dominated the junior series in 2008; it was a strong comeback and a really well earned win today. For Lewis, it was a harder afternoon - the start was not as good as Valtteri, then we had to pit him earlier than ideal to cover the risk of being undercut by Vettel. That gave him a long stint on the tyres and none of us knew if they would make it to the end, so it was hard to judge the right pace and he wasn't happy with the car balance; my feeling is that it can be tricky to find the sweet spot with these new cars and tyres, and probably we didn't manage that today with Lewis. Overall, though, a fantastic day for the team and a perfect result in the opening race - including the point for fastest lap. I know we have a very big supporter who is in Vienna now and not here with us in Melbourne - to you, Niki, we send all our best wishes and we hope you're happy with this one. But this feeling will only last as long as we stay at the circuit; when the plane takes off for home, our eyes will turn to Bahrain. We know that Ferrari have the speed to fight back, so we won't be jumping to any conclusions after just one race. We have a long season ahead full of twists and turns and challenges; we're looking forward to the fight."

James Allison, technical director
"Days in motor racing do not come much sweeter than this. A 1-2 finish is a precious thing and to top it off with the cherry of the fastest lap point for the first time, makes it feel even nicer. I guess the main reason it feels so good is that it was unexpected. We came to Australia expecting a very tough fight against a car that had set the benchmark throughout winter testing. But we found ourselves in the happy position of being very competitive from the first time we turned a wheel - and almost spent our weekend waiting to wake up from that state of slight disbelief. However, we should have trusted what our numbers told us, because Sunday turned out almost exactly how an impressive Friday had promised, and it's a fantastic feeling for all of us to achieve this result at the first race. That doesn't mean we will do the same at the next race but it is a good start: it was fantastic to see Valtteri drive so flawlessly to answer some of his critics and remind everybody that he is a class act; Lewis on the other hand was punished for a poor start and had to contend with damage to the floor of his car, but nonetheless was able to drive a strong race to seal off the 1-2 finish for the team, which will see us heading to the next race with very happy spirits indeed."