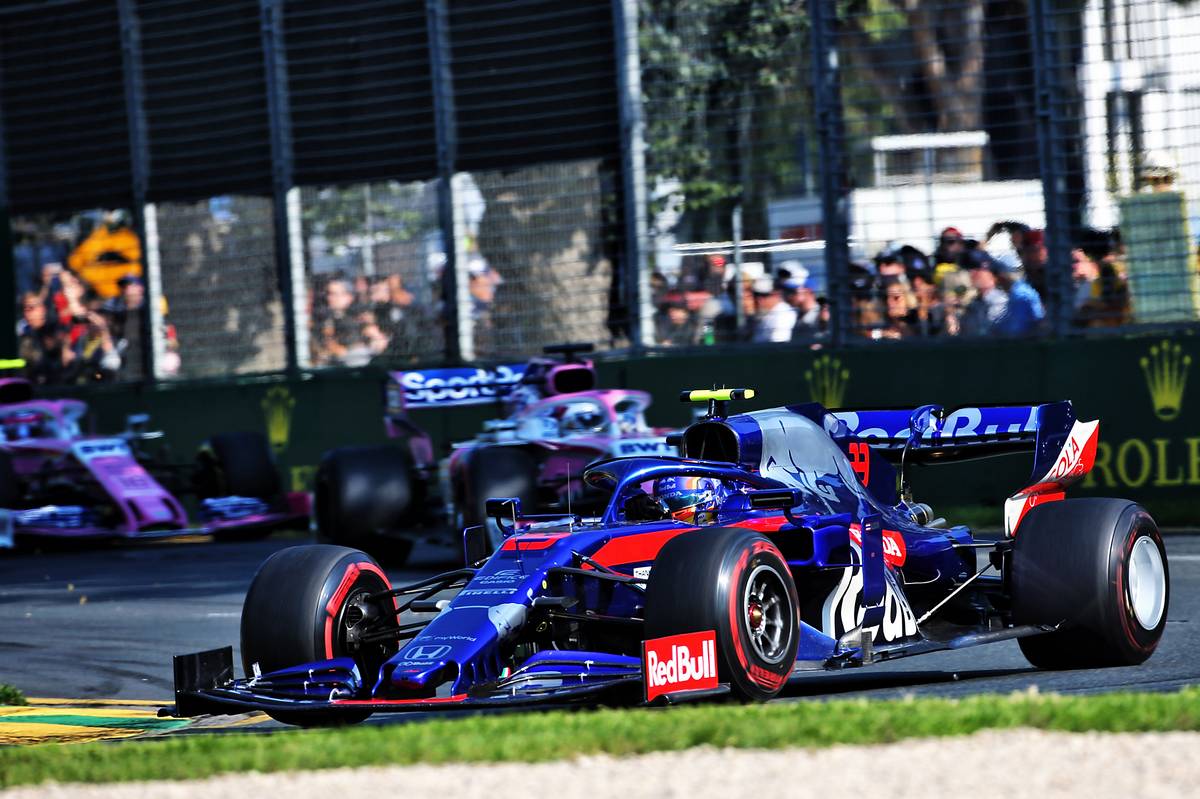 Alexander Albon
"Mixed feelings today! It was my first experience of a race weekend and I didn't really know what to expect. The race started off very well, I dropped the clutch and thought ‘great, that was okay!' I made up two positions straight away and at that time we were in the mix, as I was already one position away from the points. That was pretty much as good as it got for me, though. We were in a battle with Giovinazzi, I think he was struggling with his tyres and everyone on that strategy lost out. All of the guys who stayed out on the harder compound behind overcut us. That compromised our race but I'm still happy with how my weekend went. I think we could have had points so that stings a little, but it was a good experience and I came away with a clean weekend, relatively speaking!"

Daniil Kvyat
"It was an excellent race today! I'm happy with the way I drove and it was really enjoyable. There was a lot of positives to come from the race - it's just a shame about yesterday's qualifying as we had the opportunity to start a bit further ahead! We had good tyre management throughout the race and we definitely had the pace to fight for higher positions but, as we know, it's difficult to overtake around Albert Park. I tried to catch Stroll, but I was a bit on the edge and I couldn't make it. I had a good battle with Pierre towards the end of the race, I felt like I could fight him well and at the end it was satisfying to keep a quicker car behind almost the whole race. I know we have a good package with the car and the engine, so we need to keep developing it. I'm very optimistic for the next few races and I think it's possible to achieve good results."

Jody Egginton, deputy technical director
In terms of pace, the race was very positive for Dany with the prime to base strategy, allowing him to extend his first stint. He then put some very strong times in the second stint to be able to take home one hard-earned point. Alex faced a few more challenges, having to manage brakes in traffic early on. However, he has put in a solid performance in his first F1 race and he learnt a lot, which I am sure he will put to good use in Bahrain. In summary, on one hand we leave Melbourne positive as our new car has shown some good performance. On the other hand, we have not executed the best possible qualifying or race, which is a bit frustrating as there was more on offer. We now switch our focus to final preparations for the next race in Bahrain, the plan being to build on the positive signs shown here.

Franz Tost, team principal
"We're always happy to come to Melbourne, not only because it's the first race of the season, but It's a special race with an extraordinary atmosphere and a lot of great fans!

"First of all, I would like to congratulate Honda for finishing on the podium with Aston Martin Red Bull Racing, which is certainly a big success for them and they deserved such a result. As for our race, we started 13th and 15th and we decided to go for a different strategy for our drivers: Alex started on the option tyre, while Daniil started on the prime. This turned out to be the right decision, because it gave us the possibility to be flexible with our strategy. Daniil drove a fantastic race, bringing home a point - we must not forget he's been out of the cockpit for a year and a half, so to come back and fight successfully into the top 10 is a good sign for the rest of the season. Alex did a great job too, because this was his first race in F1 and it's not an easy circuit around here. Nevertheless, he didn't make any mistake and learned a lot throughout the weekend. After the first race weekend, we feel we have a strong package, so I'm optimistic for the next races."

Toyoharu Tanabe, Honda F1 Technical Director
"Scuderia Toro Rosso did well this weekend, with Daniil getting the point for tenth place. It was a strong comeback from him after a year away from the sport. It's clear the STR14 car has good potential. Overall, it was a positive start. I therefore thank all the staff who work on our F1 project in Japan and the UK, knowing they will be working hard to help us improve. In two weeks we race in Bahrain, which was a very strong weekend for the team last year."