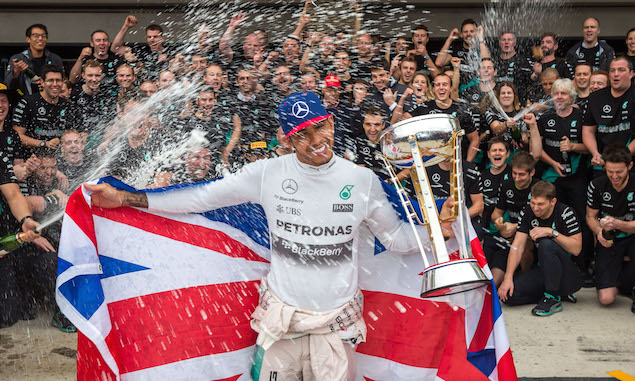 The season may not have ended with Hamilton in his best form, but it certainly started that way. 2014’s championship victory seemed to release the shackles in so many ways as Hamilton pursued personal interests off track and performed brilliantly on it for the majority of the year. His qualifying record - he took pole at 11 of the first 12 races - set up a dominant start to the season.

Having won three of the first four races with relative ease, Hamilton was robbed of an emphatic victory in Monaco by a team error but immediately hit back to win in Canada. Errors he had been making in 2014 had disappeared and his soaring confidence was displayed at Silverstone where Hamilton timed his pit call perfectly to switch to intermediate tyres as rain started to fall, setting up another win.

Hungary was a poor race, but Hamilton hit back to win five of the next six races, retiring from Singapore in the middle of that sequence. The final of those wins handed him the title in the United States and it is understandable his form dipped somewhat after that, even though he felt further wins in Mexico and Brazil were there for the taking but for Mercedes strategy. His level rarely, if ever, drops below very good.