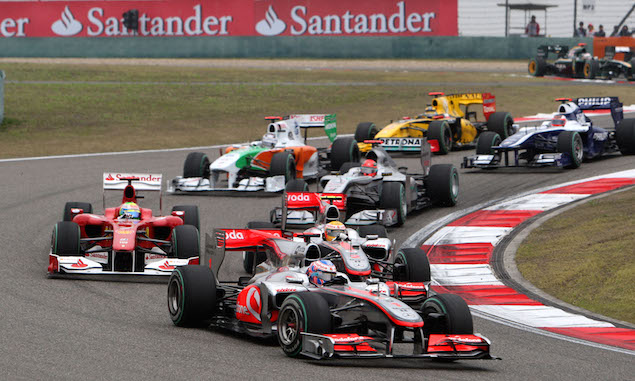 Another case of clever tyre strategy from Button in similarly tricky conditions at the Chinese Grand Prix helped him become the first repeat winner in 2010 and take the Drivers’ championship lead.

Having pipped team-mate Hamilton to fifth in qualifying, Button quickly gained a position when Ferrari’s Fernando Alonso jumped the start from third and had to serve a drive-through penalty.

There was further drama in the pack on the opening lap after light rain had appeared on the grid, which led to a first Safety Car period.

While most of the front-runners elected to pit for intermediates as the rain seemed to intensify, Button stayed out in dry-weather tyres and slotted into second behind Mercedes’ Nico Rosberg. Heavens never opened in earnest and forced those who had switched to inters to make another stop for slicks.

Out in front, Rosberg and Button now had a healthy lead, with the reigning world champion taking advantage of a slight mistake from the German to vault himself into first position on the Shanghai International Circuit’s immense back straight.

Although another Safety Car period effectively erased Button’s comfortable lead, the Briton once again kept his cool and held off a recovering Hamilton all the way to the chequered flag to make it McLaren’s first 1-2 finish in three years.