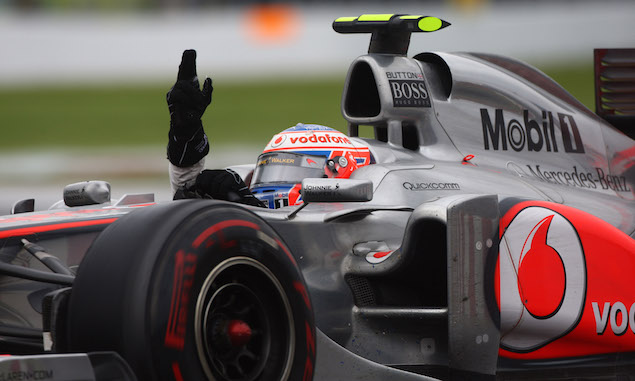 Arguably Button’s finest career victory. The 2011 Canadian Grand Prix saw the Briton recover from an early collision with his team-mate, six stops – including a drive-through penalty – and being last after 40 laps following another clash, to win the longest race in F1 history at over four hours.

Heavy rain meant the grand prix started behind the Safety Car, with Button sitting seventh. He quickly gained two positions when Hamilton and Mark Webber tangled ahead of him as racing got under way. However, Button immediately dropped back to his initial position when he ran wide on the same lap.

The 2009 world champion re-claimed sixth from his team-mate, before the two McLarens collided on the main straight following Hamilton’s attempt to sneak on the inside of Button. The 2008 title winner ended up hitting the pit wall and retiring, which triggered the second of six Safety Car periods.

Racing resumed on lap 13 but Button had to drive through the pit lane after being handed a penalty for speeding during the previous neutralisation. Weather conditions worsened and led the officials to suspend the grand prix. The interruption lasted for two hours until the race was re-started behind the Safety Car.

Having climbed back to 10th, Button then made contact with Alonso, which sent the Spaniard into retirement and the McLaren driver to the pits with a puncture. After 40 laps out of 70, Button was 21st and last.

As track conditions improved, the 31-year-old began slicing through the field, this time keeping his nose clean when others faltered. A sixth Safety Car bunched the field together once more, giving Button the sniff of victory he needed. Having fought his way up to second, the Briton entered the 70th and final lap less than one second behind race leader Vettel.

Feeling the pressure, the Red Bull driver slithered off track on one of the remaining wet patches, which allowed Button to take the chequered flag after four hours and four minutes. Epic.