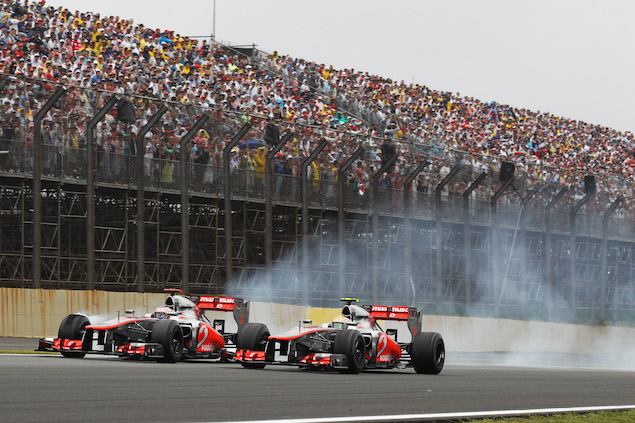 15 wins in 17 seasons may not sound like much, but when you take the fact that Button secured McLaren's last victory into account, it shows how he has enjoyed few seasons in race-winning machinery. 2012 was one such year and Button lined up on the front row beside pole-sitter Hamilton in his team-mate's final race for McLaren.

It is perhaps apt that Button's last win came in a chaotic race with changing conditions, as Brazil so often provides. Button called the conditions correctly as light rain fell early on, staying out on slick tyres as many around him pit for intermediates but needed to change back to slicks soon after. As a result, Button and Nico Hulkenberg enjoyed a comfortable advantage and the Force India took the lead on lap 19 as the pair led by almost a minute.

A safety car soon bunched up the field again due to debris, and Hamilton moved ahead of Button and set off after Hulkenberg. An error from the Force India handed Hamilton the lead, but when Hulkenberg attempted to retake the position the two collided, eliminating Hamilton and giving the German a drive-through penalty. It was an incident which promoted Button back into a lead he would not relinquish, although the race finished in the wet under the safety car after a late crash for Paul di Resta.

It was another drive showing Button's class and feel for wet conditions, which perhaps didn't get the credit it deserved in the shadow of a dramatic title decider between Alonso and Vettel.