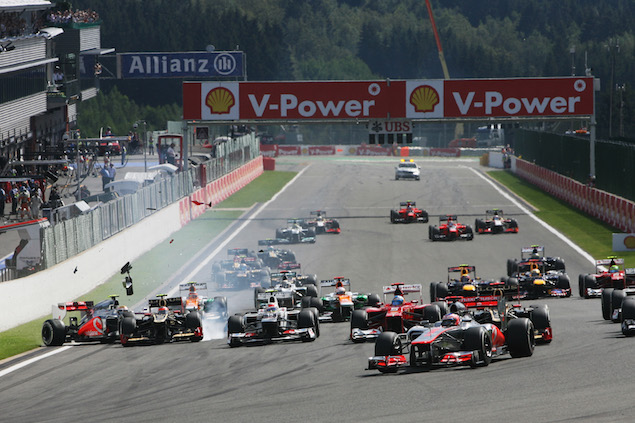 One of Button's more comfortable wins - and a very dominant one - was overshadowed by team-mate Hamilton's struggles and a terrifying first lap crash. Button got his set-up spot on, running less wing to aid top speed in the first and third sectors at Spa-Francorchamps, while dealing well with the lower downforce in the middle sector.

Pole position was his by 0.3s ahead of surprise packages Kamui Kobayashi in the Sauber and Pastor Maldonado in the Williams, while Hamilton - eighth on the grid - tweeted telemetry in an attempt to show where he was losing so much time to his team-mate having gone in a different set-up direction.

Button made a good start and led away comfortably, but all sorts of carnage was unfolding behind him as Romain Grosjean triggered a scary crash which ended with the Frenchman's Lotus missing Fernando Alonso's head by inches at Turn 1. Alonso and Grosjean were joined in retirement by Hamilton and Sergio Perez, while Maldonado and Kobayashi suffered damage.

The incident allowed Vettel to climb through the field to second ahead of Raikkonen, but Button's strong weekend had ensured he was well clear of all the trouble, cruising home with an advantage of more than 13 seconds to win at Spa for the first time.